Taking a break from finishing my thoughts potentially changing schools to address a comment on the last post.

“Karen” took the time to comment on my post recapping the convo with the teacher and principal. Here’s her take: 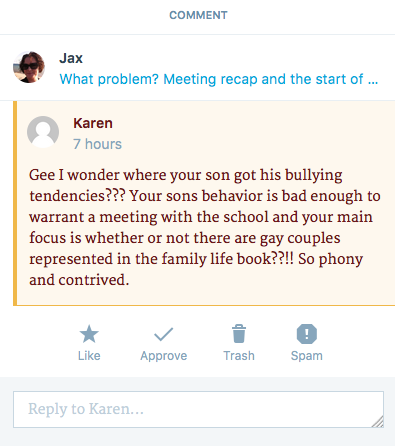 Gee I wonder where your son got his bullying tendencies??? Your sons behavior is bad enough to warrant a meeting with the school and your main focus is whether or not there are gay couples represented in the family life book??!! So phony and contrived.

First, thank you for taking the time to write, “Karen.” I appreciate hearing for anyone who reads this blog. I’d also like to thank you for kicking me in the ass to write a Comment Policy for Mommy’s Little Blog. Check that off the list! 🙂

Second, this is a tough one. At first “Karen,” I wrote you off as a troll (my first!), and I really wanted to rip you apart. I wrote and rewrote a couple of pretty witty responses. But friends talked me down and encouraged me to look at your comment in a new way. So with a different focus and a new way of looking at it, I’d like to address your comment, “Karen.”

I really didn’t think the conversation recap came across as bullying on anyone’s part. It certainly wasn’t the intention – in reality or in the recapping of it. Your comment makes me feel like you don’t know much about the situation or why my son and I were there or why it’s super frustrating for me.

See, it’s not our first rodeo in the principal’s office. Everyone (teacher and principal included) agrees my son is a good and smart kid, but he has a hard time with his emotions as a result of grief and trauma. He’s 10, and in the last five years, he’s dealt with – in order – the loss of his only child status, the death of his grandpa (who he loved more than anything), his dad’s alcoholism (and the verbal/emotional/mental abuse associated with it), his grandma moving in, his parents’ marriage falling apart because of the alcohol, his mom losing her job and finding another one 8 hours away in another state, a move, starting in a new school, the death of his dad two weeks after starting the new school, his grandma getting really sick and doctors not able to diagnose her illness, his mom starting to date, his grandma buying her own house and moving out, and his mom getting (and beating) cancer. There were probably a few other things that happened in that time frame, but that’s a quick snapshot.

“Karen,” I think you’d agree that’s a shitload of stuff for a kid to deal with. Hell, it’s a lot for an adult to handle.

Ethan’s in counseling (and has been for several years). He also attends a grief group for families. He’s been a matched Little for three years, and his Big Brother is awesome. He does tae kwon do and has been in Boy Scouts. He plays Minecraft and Legos. He loves Marvel comic books and movies. He’s an awesome 10-year old kid.

But he’s grieving. “Karen,” I don’t know your situation or what you know about kids and grief, but it’s a horrible, bumpy, rocky road. There are steps forward and giant leaps backward. There’s regression and repeating the standard grief steps over and over as he reaches different maturity milestones. As a parent, you just never know what will trigger a regression or how long it will last.

And I’m a Mama Bear. To an outsider, it might come off as bullying, “Karen,” but I have the best interests of my kids at the forefront at all times. I’m always looking out for them, educating people about kids and grief and how it manifests in different ways. Kid grief is completely different than adult grief. It doesn’t go away. He can’t and won’t just get over it. As a mom, I’ve got my kids’ backs – always. Because I have to.

There isn’t another parent to say, “Sit down, honey, I’ve got this one.”

There’s not another parent to run an idea by or run interference with a teacher my son has a personality conflict with.

It’s me and my kids “bullying” our way through life. Doing the best we can with the shitty hand we’ve been dealt.

No, my kids are not perfect, and I don’t treat them like they are. They have rules and responsibilities and chores, just like other kids (and in some cases, more than their peers).

No, I’m not perfect, and I don’t pretend I am with my kids or anyone else. I get very uncomfortable when people say, “you’re doing a good job” because it’s not always sunshine and rainbows at our house. It’s messy. It’s real. My kids have had to grow up faster than I would’ve liked. I’ve had to change in ways I didn’t anticipate or want or ask for.

“Karen,” I’m a mom. And as a mom, I know my kids better than anyone else. I’m not bullying the school about Family Life or anything else. I’m explaining why conversations about a traditional family model are hurtful to my son and how those conversations are triggering emotions which come out in behaviors I don’t like.

I can’t take away his pain about not having a dad to talk about in Family Life. But I can take him out of the (optional) class and explain to the school why such lessons might be hurtful to kids – mine included – who don’t live in the mom-dad-2.5 kids-dog-white picket fence traditional family model.

My problem is that the book/lesson plan is grossly outdated and not reflective of today’s society. As a mom, I strongly believe that one of my jobs is to prepare my kids to survive and thrive in the real world. It’s my job to make them into decent, responsible, good human beings. Understanding the world in which they live is part of that job.

Ethan’s class had Family Life lessons today, “Karen,” and Ethan spent the 30 minutes in the office reading and doing homework. As a result of not having to sit through the class and the outdated, inaccurate portrayal of “family life,” his behavior in school today was stellar. Go figure.

Finally, “Karen,” I wanted to take a second to address your point about gay couples in the Family Life book. It wasn’t the “focus” of my post, nor was it the “focus” of my complaint to the school. But the book and the lesson plan are called “family life.” Just like interracial couples (also not represented in the book), same sex couples exist. They marry. They have families. Regardless of how your feelings about gay marriage, this is “family life” in 2016. If the school – ANY SCHOOL – is teaching students about families and how they’re the same and different, you can’t have a real conversation without acknowledging gay people who have children. My point is/was families don’t look like those portrayed in the book. Gay. Straight. Married. Divorced. Widowed. Single. All the colors. Together and mixed up.

2 thoughts on “Focus on love and bullying: a response to “Karen””