My sister. Where to start? She may or may not be sick. She may or may not have an incurable, terminal disease. Yes, since I last updated her situation, there’s much doubt as to what’s really happening. Even my mom is now questioning what’s going on since Julie’s story isn’t holding together, and Julie refuses to let my mom go to medical appointments with her or talk to her doctors or share her test results.

What’s known: She quit her job without a plan. She filed for disability. She needs to find a cheaper place to live since she has no income.

My mom offered that Julie and her daughter could move into her condo. Julie was receptive, until she heard there were rules. Things like: your dogs cannot live here (per condo association rules), you will help with chores around the house, you cannot smoke in the house, you will not lie in bed all day/every day.

Julie declined the offer and said she didn’t want to follow rules. She also said she had everything under control.

Her plan, apparently, is soliciting money from friends, family and acquaintances. Money that is going to who knows where, but not where she says it’s going…

She recently opened a page on one of those “ask for money and share on FB” sites. She claimed she needed $1,000 to stay in her apartment, make car payments, and keep the utilities on. When she hit a few hundred dollars, she commented that she made her daughter’s last tuition payment for the year and paid the light bill.

What she didn’t say was that she hasn’t even started looking for a new, cheaper apartment. Or that she doesn’t have any long-term plans continue paying her bills. Or that she spends hundreds of dollars a month on cigarettes (God forbid she give those up).

Or that MY MOM paid my niece’s last tuition payment of the year – the one that Julie claims on the site that SHE paid with the donations from friends/family. (My mom’s no fool – she paid the school directly because she won’t send Julie money knowing it will NOT go where Julie claims it will).

Julie “raised” more than $750 in the last six days. Most of the donations are anonymous – which is probably best because my mom has been monitoring the page and has said she’ll call anyone who donates to tell them they’re foolish.

It’s mortifying that my sister is preying on people’s good nature.

It’s horrendous that she might be lying about her illness, especially when there are so many others in the world who truly are sick and need help (financial and otherwise).

It’s unforgivable that she has talked my niece into quitting college next year so that Julie will not be “alone.” (That’s another topic for another day…)

Friends, do NOT believe what you read on the Interwebz. Even if you think you “know” someone. You might as well send your bank routing number and social security number to that email claiming you won a European lottery.

I leave you with this thought from the Great Abe Lincoln (side note: I posted this photo to my FB profile, thinking I was sending a subtle message to friends who are connected to both Julie and me. Instead Julie commented on it first, without “getting” that it was directed at her.) 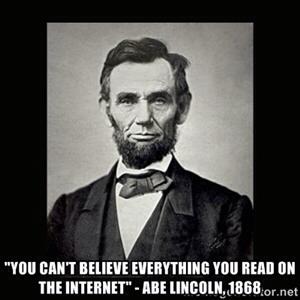