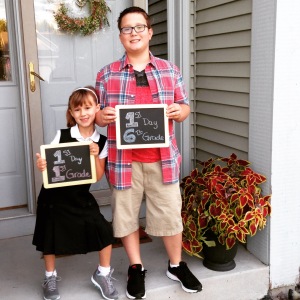 Ethan and Lauren started school today. Sixth and first grades. And I cried.

I don’t remember crying when they went to preschool or kindergarten, but this year was different – and super emotional. The kids are going to a new school. Each to a different school, actually. And I’m happy and I’m sad and I feel completely and utterly overwhelmingly guilty.

When Mike and I decided to have kids – actually before that – we agreed that we wanted the kids to have a Catholic education. It was so important that I converted to Catholicism before we got married so this would be a family thing.

When the kids and I moved here, Mike was fairly involved in the “finding a school” process. We continued to agree that the school should be Catholic. As I looked at areas to live, Mike was looking at schools (via the Interwebs). While he never visited the schools or talked to anyone, he had a say in where our kids would go.

And I really liked the school we chose. Then Mike died.

I’ve written about it before – just weeks into his new school, Ethan was called down to the principal’s office to get the news. His teacher, the principal, the priest, the families made us feel so welcome and so much part of the “school family” in those difficult early days and weeks and months (and beyond). Same when I was diagnosed with cancer. I truly love the families at the school.

The school isn’t a good fit for Ethan. That’s hard to think, to write, to say because I did a lot of research to find this school.

And I feel guilty about making the decision – the best decision for him and one he’s asked for for several years – to change schools. Guilty because Ethan will attend public school for sixth through eighth grades. And that’s not what Mike and I agreed to. And Mike’s not here to support or refute my decision. And I can’t discuss it with him. And I can’t get his okay.

I CAN’T GET MIKE’S OKAY. I will never have his okay…

So, regarding Lauren, I decided to move her to a different school, too. I’m keeping her in a Catholic school (for now). I’ve met with the principal and her teacher to discuss the situation, and they seem more competent/compassionate/understanding. I’ve explained some of the childhood grief issues we had at the other schools, and they seem better equipped to handle it. Lauren’s a completely different kid with different needs. She’s going to be alright no matter where she goes. I feel really good about her new school, and wish I would have moved Ethan here last year (it only goes to fifth grade, unfortunately).